After reading almost everything I could find about Elaine Castillo after finishing her novel, this is what stuck in my mind:
What is striking about “America Is Not the Heart” is how it’s unapologetically Filipino, peppered with expressions in Ilocano, Pangasinan, and Tagalog and nuances like wearing tsinelas, calling everyone Ate, faith healing -- with no italics, no footnotes, no glossary of terms…
Post a Comment
Read more

America is not the Heart

June 30, 2018
"Your word for love is survival.  Everything else is a story that isn't about you."
Today is about the novel America is not the Heart.  This book is really good, and it has made me think a lot.  I've even staved off reading my next book (Nora Ephron's Heartburn) so that I can think about America is not the Heart some more.  I hadn't finished it in time for book group, and no one else wants to talk to me about it (yet), so this morning I decided I could articulate my thoughts on my little, old, mostly neglected blog.  At least the thoughts could take solid form instead of swirling in my head.

I found a review for America is not the Heart when I was looking on the Guardian for something new to read.  It's a great place for new inspiration for me - it's where I found Sarah Perry's The Essex Serpent, Tobias Hill's What was Promised and Selina Todd's The People.  The New York Times review for America is not the Heart was similarly promising.

I went away for the weekend and suffered a traumatic incident.

It started off quite innocently.  I was at my parents house, and they have properly (wastefully) good water pressure and gas hot water and so I had a very long shower and eventually followed that with borrowing Mum's hair dryer.

Ever since Hitchcock's shower scene, we have known that bathrooms are dangerous.  Behind the clean white lines lurk danger, and yesterday was no exception.  There should have been high pitched violins playing when I decided to step on Mum and Dad's scales.

The scales told a message I was not interested in hearing, using numbers I did not think should have relevance to me.  I thought they might be broken, but my longsuffering and ever loving husband just talked supportively about exercise when I told him, which is not the same at all as declaring the scales corrupt and incorrect.

So it's no bloody wonder that I'm looking at dressing in stretchy jeggings and flowy merino tunics.  …
3 comments
Read more

Trousers should stay up

April 11, 2018
Trousers should stay up.  Who knows what part of my anatomy will need a sewing intervention next.  It took me far too many years to develop successful interventions on my cleavage (or more specifically, how to cover it without strain lines - even tent dresses require alterations).

Ageing seems to be about parts of my body migrating south.  I can now see exactly how fat ankles come about, and no doubt that is a joy in store for me once I sort out keeping trousers in the right place.

I think back five years, even three, and I don't recall walking down corridors hitching my trousers back above my belly.  Or stopping in my office to hike my waistband back up to where it should live.  There is no positive behaviour management system for my body, or not one I'm looking for right now. This is not a zone for discussing exercise.  Or spanx.  I'm not that kind of feminist.

So, I'm back in maths mode this afternoon, thinking about where the tension should best be in order to ho…
1 comment
Read more

Sometimes future sewing is more gripping than current sewing.  Like today, when I'm up to the collar stage on McCalls 6898 but windowshopping on the net instead.

I started with seeing this, Chocolat's Staple Skirt:
I like it a lot.  Two problems:
1. I would get tomato sauce on that colour before the first day of wear was over.
2. $327 is a lot of money.

So I go looking for patterns to make my own,  I have nothing to wear with this, and no fabric that is suitable.  But that should not always be an impediment.
I look at Vogue 8499 and Vogue 8975 and I see this version of V8975 and it seems I could be back in dress land again:
I'm not sure I can make the dress in fabric as soft as the Chocolat one appears.  Maybe I have to chop it off at the waist and put a wide elastic band in.
Post a Comment
Read more 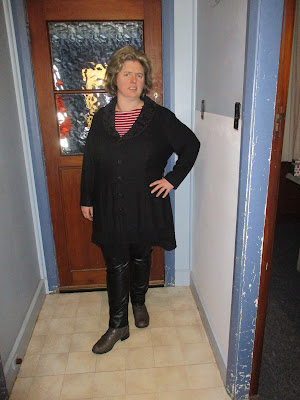 Black never photographs that well, but it's pretty useful otherwise.  I need to wear the jacket a few more times, but at the moment, it clearly needs a narrow shoulder adjustment, and that will also bring the armscye upwards.  It's a little too big from the waist down as well.  So the cuddly jacket is working for this one, but I might make the shorter version.  I had been thinking of the pleated back again, but maybe I will go classic, after seeing some beautiful online versions.  I didn't get the button placement right for the collar to sit flat, and now that I've lost my jacket-sewing virginity, I decided I was ready for Jackets for Real People to teach me how.  Book Depository really is like a late night addiction for nerds, and just to make things efficient, I ordered Elsa Morante's History as well.
The trousers are my first foray into sewing pleather.  The walking foot handled it beautifully.  I started with Style Arc Barb pants and kept on trying them on and…
40 comments
Read more

Sewn, worn and partly photographed.  The glimpse of dress is the Cashmerette Appleton.  It's my second version, and I like it and will make it again.
The jacket is McCalls 7288.  It's better worn over jeans or trousers, but I was keen to give it a test drive.  The shoulders need narrowing next time, and that will lift the armscye.  I like the shawl collar, but haven't quite put the buttons in the right place for the collar to sit right.  I need to wear it a few more times to decide whether I will take the front seams from the waist down.  This version is like a cuddly coat, but the next fabric is thinner and I was thinking more tailored jacket than coat for that one.
I've ordered Jackets for Real People - I think I'm ready to learn some jacket making craft.  I have the fabric to make a red version of M7288 - it will be the shorter style that still has the back pleat.  I've seen some beautiful versions of the short and non-pleated version online so might make t…
2 comments
Read more
More posts